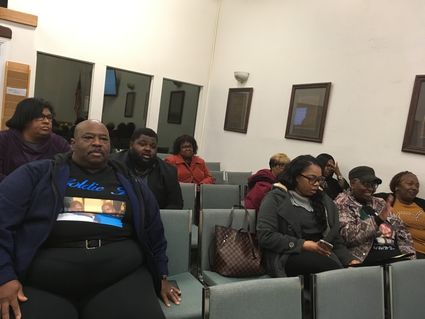 Takhar told the staff that worker's compensation and health care costs continue to rise. There has been one-time sources of revenue for property sold to the High Speed Rail Authority in prior years, he said. "Measure X [the enhanced city services measure] is also another revenue source."

The cost of safety services also are rising. The city is projected to pay $507,591 for fire services and $507,591 for coverage by the Kern County Sheriff's Department this year, Takhar reported.

Another financial item on the agenda was the cost of, and payment for, a water line Poplar Avenue between the Wasco Union Elementary School District and the City of Wasco. 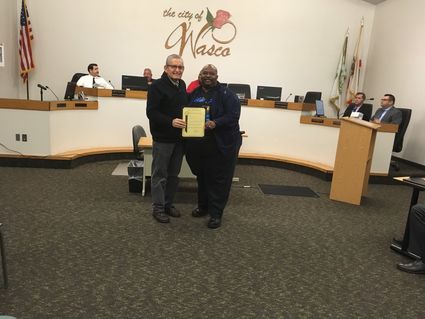 A relative of Goldie Coleman, Jr. accepts a Letter of Recognition from the city.

--Mayor Pro Tem Tilo Cortez and Councilmember Gilbert Reyna have both been working on helping the families relocate from the original farm labor camp to the new one. Each family has to requalify financially in order to be able to relocate.

--Sergeant Augustin Moreno of the Kern County Sheriff's Department reported that there were 16 felonies, 38 misdemeanors and 199 citations issued for the month of January. "In 2017, there were two gang-related incidents, and in 2018 there were 16 incidents," Moreno said. "We believe the reason for this increase is the Sheriff's Department procurement of a couple of additional deputies from the Bakersfield gang unit. The additional deputies know exactly what to look for."

--The council recognized a recently deceased local man, Goldie Coleman, Jr. He was a member of the Planning Commission and a well-known resident of Wasco.