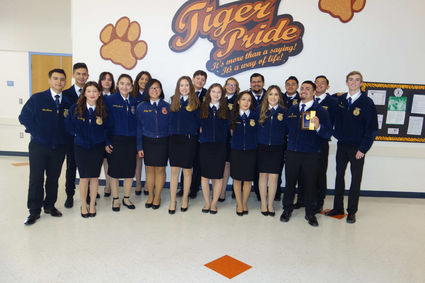 The five categories in the competition were Job Interview/Resumes, Extemporaneous (speaking or performing with little or no advance preparation) Public Speaking, Creed Recitation (five paragraphs memorized from the FFA Creed), Impromptu and Prepared Public Speaking.

"Freshmen were allowed to compete in Creed Recitation onlywhich is a five-paragraph state of beliefs that E. M. Tiffany wrote (in 1928), and it was adopted at the Third National FFA Convention," said agriculture teacher and FFA Advisor Anthony M. Farao. "It was revised and adopted at the 38th and 63rd Conventions to reflect the growing diversity of the FFA and the agriculture industry."

There were five freshmen who had never competed before. "We walked into a classroom, presented our speech," said Karissa Andrade. "We were asked three questions on our topic and hopefully, we answered them to the judges' liking and then we were done." Additionally in other classrooms, several different competitions were going on at the same time.

For the freshman, "The Creed challenges the students to memorize, introduces them to public speaking and prepares them to answer questions asked by the judges," said ag teacher Beatrice Rodriguez. "This pushes them into leadership roles."

Rodriguez added that the sophomores competing will revert back to their freshman topic and talk about it as it relates to agriculture while giving them a look into the future. "The juniors will have 30 minutes to create a speech – this could be anything agriculture-related, while seniors practice job interviews and answer questions about their applications and resumes they have created and what direction they see their future heading."

"The agriculture programs are tailored to the specific areas," said Rodriguez. She described the San Joaquin Region, which Wasco is a part of, as being as far south as Mt. Frazier and north to McFarland. 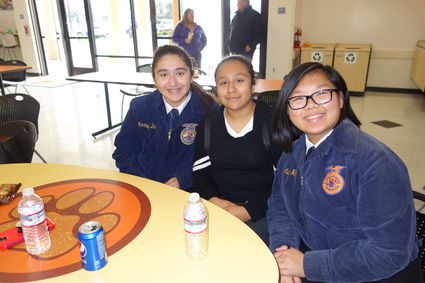 Many students like the competition. "I feel this will push me to do things I thought I would never do," said Christopher Padilla.

Freshman Corina Gonzales grew up in Mexico and has always been involved with animals. "I've never been in a competition before," she said. "I never thought I would be doing something like this."

"It was a fun experience," said Christopher Padilla. "I'm very emotionally involved in the program." Senior Tyler Ruddell said that he would like to go to Reedley College and then Fresno State and become an ag teacher.

Overall, the students enjoyed meeting FFA students from other high schools in the area and said getting to know different people was fun and challenging.

The three student winners will be moving on to the Regional competition at 8 a.m. on March 15 at College of the Sequoias in Tulare.