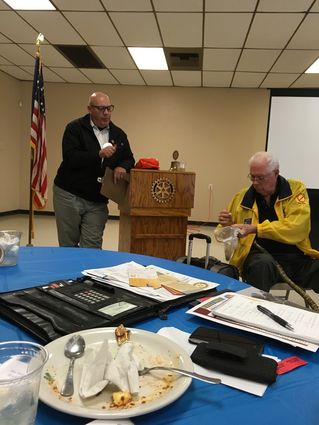 A Rotary member and polio survivor is on a crusade to help all Rotarians stamp out the polio virus for good around the world.

James "Jim" Lewis of Simi Sunrise Rotary presented a slide show to the Wasco Rotary at its weekly meeting on Monday.

Lewis defined polio as infantile paralysis – a highly infectious disease that can go to the brain, central nervous system and the arms and legs. "Polio has been around for thousands of years," said Lewis. "It causes muscle weakness. If it affects your lungs and you have trouble breathing, an iron lung might be necessary to aid in the breathing."

Lewis described how he and his brother became ill in the early 1950s with aches and pains, and fever and chills. "When my brother and I got sick, my father carried my brother and my mother carried me down 52 steps to the doctor's office," Lewis said. "The doctors gave us both spinal taps and told our parents that we both had polio."

It only took two weeks for Lewis' brother to leave the hospital and head back home; however, it took Lewis quite a bit longer. Lewis walks with a large walking stick that is a replica of Mother Theresa's. It's a tall stick because Lewis is a tall man. He wears calipers (braces) on both legs to enable him to walk and stand up. His legs are still weak.

Lewis doesn't complain. In fact, he proudly describes his many excursions when he travels out of the country to help with polio vaccinations in countries like Pakistan, Honduras and India.

"I grew up in a family of athletes, he said. "Even though I couldn't play sports, I coached them," he said. "I could always swim, so I coached water polo."

Once Lewis joined Rotary, he discovered that Rotary International's main project was to eradicate polio in the world. Lewis became involved in the virus eradication campaign when he joined Rotary in 2001. "In 1979, seven million children were vaccinated."

Lewis informed the attendees there are three types of polio. "Type 1 has been eradicated and Type 2 was declared eradicated in 1999, but it has returned in Nigeria and Type 3 was eradicated in 2012.

Lewis reported that in 1985, Rotary International took over the campaign and changed the name to Polio Plus. Other organizations involved in the polio eradication campaign include WHO (World Health Organization), UNICEF (United Nations International Children's Emergency fund, CDC (Center for Disease Control) and the Bill and Melinda Gates Foundation.

Over 4,000 people got polio in the 1950s. The virus is easily preventable by the polio vaccine. Treatment can help but the condition can't be cured. Polio spreads through contaminated food or water. To diagnose polio, lab tests or imaging are always required.

For every $25 donated, the Bill and Melinda Gates Foundation will donate $50 for a total contribution of $75 to fight polio up to a maximum of $50 million per year for the next three years.

Lewis shared that on one of his trips to India, the team went to a home and asked the mother of the house if they could vaccinate her children; she said no, that her husband would kill her. The team gave the children balloons and whistles. The families were unaware the whistles had the vaccine on the tip of each whistle, so all the children were eventually vaccinated. 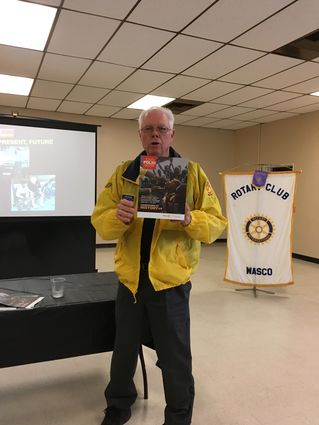 Since eradicating polio is the major project of the Rotary International, at the end of the presentation Rotary President Martin Lonza proposed that the Wasco club use the Polio Plus Society donations as a Wasco Rotary Club match. "What that means is that for every member who donates $50 to the society this month, our club will match the $50 to make it a $100 donation," Lonza said. "I believe the majority of the club members will agree to make a personal donation. This should raise about $2,000 for Polio Plus."