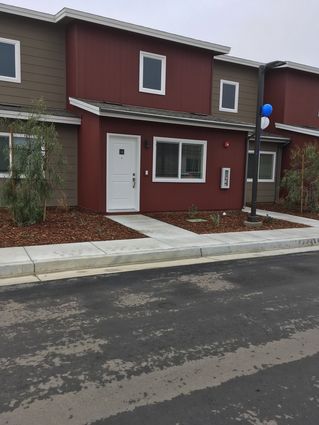 Contrasting colors blend with the landscaping of Rosaleda Village.

Hundreds of Wasco residents will soon be moving to the new Rosaleda Village -- 226 units in sleek, energy-efficient buildings surrounded by low-water landscaping, a community center, day-care center and other amenities.

The Housing Authority of the County of Kern and Wasco Affordable Housing held the grand opening of its newest project, located near North Poplar Avenue and Margalo Street. The official ribbon cutting took place on Jan. 10.

Opening remarks were made by the executive director of the Housing Authority, Stephen Pelz.

"When all these beautiful new homes are filled, nearly 1,000 Wasco residents will benefit from living in quality new homes with close access to services, shopping, schools, parks, a new childcare center and other amenities," Pelz said. "This is the biggest new construction affordable housing development in Kern County in over 25 years, with 10 different funding sources. It's the first project to use High Speed Rail funding, first to transfer USDA [U.S. Department of Agriculture] and HCD [California Department of Housing and Community Development] to move a housing program from one site to another."

All of the units located at Rosaleda Village are energy efficient and made with materials designed to promote the health of the residents and improve the environment. The city installed new sidewalks, bicycle lanes and a new transit line serving the site to encourage residents to use alternate means of transportation.

The interiors of the homes feature vinyl wood-plank flooring, black energy-efficient appliances in the kitchens, including gas stoves, and separate laundry closets. Outside, the landscaping is low maintenance with large walk-on redwood bark, water-tolerant trees and small drought-resistant plants. Each building is painted a brick red ,accented by an adjoining wall of either blue or grayish brown.

Each speaker outlined his or her journey to the ribbon cutting and complimented the project's completion.

"Bank of America stepped up and provided over $35 million in construction loans for Rosaleda Village," Pelz said. They've been a supportive and understanding financial partner over the past 18 months." 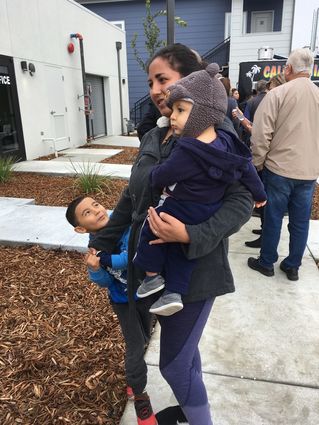 Rosaleda Village began in May 2016 after the California High Speed Rail Authority agreed to allocate $8 million to the City of Wasco to build a wall protecting farmworker housing residents from the noise of the anticipated high speed rail line. However, then Mayor Cheryl Wegman and others indicated they wanted to relocate the 224-unit farmworker housing to another location. "These individuals live on the edge of our city; having to cross heavily used freight railroad tracks to attend school, go shopping, go to church and other activities," said Wegman. "A plan was developed to move the farmworker housing to another location in the city that would reintegrate the residents into the city."

The High-Speed Rail Authority then approved $10 million toward the relocation of the farmworker housing complex.

Several current residents attended the ribbon cutting, and resident Ana Lilia brought her two young sons to enjoy the festivities of the day. "I've been a resident here for two years," she said. "This is much better than the other location."

Mayor Garcia grew up near the old farm labor camp on the corner of Sixth and H streets, just a few feet away from the tracks. "It is a momentous occasion," said Garcia. "We're bringing families into the fold and life of Wasco out here. This is going to mean a lot to them and to the c