City Manager settles in – with plans for the future 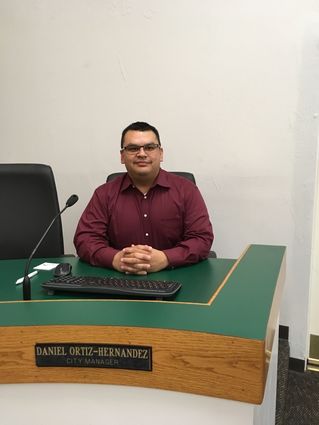 Daniel Ortiz-Hernandez has been at City Hall since Sept. 10, and he seems to have settled in nicely. "Now with the new council installed, it's time to get down to business," he said.

"Since day one, Daniel has always had the best interest of our city at heart," said Mayor Alex Garcia. "He has worked tirelessly to identify areas which required immediate restructuring – up to and including necessary staff changes."

Garcia added that the city manager has committed himself to the city for five years, "and I know that if given the proper resources he requires, he can make our city work more efficiently for all our residents." He has an open door policy and is flexible when things unexpectedly happen to cause delays.

Ortiz-Hernandez maintains a calming presence, and the warmth in his voice encourages respect. He is happy to be in Wasco with his family and likes the small-town connections you make while living and working within a small community.

An important aspect in Ortiz-Hernandez's perspective is making sure Wasco's online presence serves the community. "So far," he says, "the website is up to date with relevant information, but there is always more that can be done."

When asked if there was any new construction being planned, he indicated there is an interest from others, but nothing is set. "The things we do can have a dramatic impact on others," he added.

"When you work for a small government like Wasco, employees have to wear many different hats," Ortiz-Hernandez explained. Several employees do multiple jobs, such as City Clerk Maria Martinez. She handles personnel issues for the city until a human resources specialist is hired.

He says his number one goal is economic development, not just in retail stores being brought into town, but business development. "I want to see businesses come to town that would bring a lot of employees so they would need housing," he said. "There is a limited supply of property available that can be completed in Wasco for this type of development."

An important factor is he doesn't want to see local businesses suffer when "big" stores come to town. "I want to see the local merchants succeed," Ortiz-Hernandez said.

The new city manager believes in enhancing the quality of life for all in Wasco.

With both being relatively new, City Clerk Martinez reflected on her time \under Ortiz-Hernandez. "I love working for him," she said. "He's a great leader and communicates well with everybody. He's also very easy going."