Dr. Renken focuses on you

Longtime optometrist treats from the heart 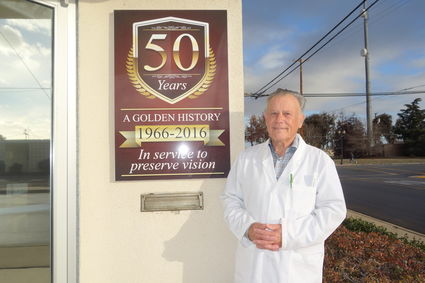 Dr. Wolfgang Renken celebrated 50 years at his location in 2016.

In addition to skill and education, Dr. Wolfgang Renken's warmth, kindness and unassuming humor make his patients feel cared for and at ease, his top priority.

Upon entering his optometry building, the first thing you notice is how the sunny, yellow exterior of the building is reflective of his staff. Maintaining the office with a warm, engaging smile is Diana Lopez who has been with Dr. Renken for 25 years. When asked why she has worked for him for so many years, her response came quickly. "He is one of the most caring and kind people I've met," she said. "He treats his employees and patients from his heart." Her sister, Lucia Lopez, who was hired five years ago, added, "He is very family oriented." This was confirmed while chatting with him about a recent trip, with three of his grandsons, to his native country of Germany.

Wasco Councilmember John Pallares said of Renken, "I have known him for 20 years now and really got to know him when we volunteered with different events for the Knights of Columbus. He is the most sincere person I know. He doesn't try to be funny, but he makes me smile. His positive outlook on life makes him fun to hang around."

Dr. Renken attended the University of California, Berkeley, where he studied to become an optometrist. When an optometry position became available in Wasco, he and his late wife, Ingrid, left the Bay Area and moved to the San Joaquin Valley, desiring a smaller community in which to raise their family.

Dr. Renken worked in a partnership with Dr. James B. Hahn at 1414 7th St., until he bought out Dr. Hahn and began looking for a new office location. It was at this time that he had a choice to make whether to relocate to a new shopping development on Highway 46, where Save Mart was located, or stay in the downtown area. While searching, he located a vacant lot, and the building at 1301 7th Street was built and designed to his specifications.

Dr. Renken has now been practicing optometry in Wasco for over 50 years. When asked if he thought about retirement, he replied, "Not at all. I will continue working as long as my body lets me." 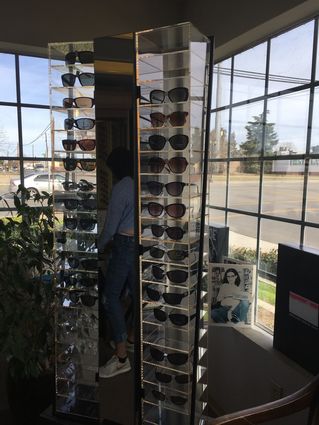 A selection of sunglasses in Dr. Wolfgang Renken's his office.

The office is located on the corner of Griffith Avenue and 7th Street, across from Fiesta Latina Market. Office hours are Monday through Friday from 9 a.m. to 5 p.m. Some of the services he provides include eye examinations, primary care, eye glasses, contact lenses and emergencies. "At the present, Dr. Renken has over 500 patients," said Diana. "He has his regulars that come in every summer when the kids are out of school as well as those who come in for their annual checkups."

Dr. Renken does not accept walk-ins, and patients must have vision insurance. Patients may use credit cards, checks or cash to pay for their services. This is a tri-lingual office, as Dr. Renken speaks English, German and Spanish. Appointments can be made by calling the office at 661-758-6320.