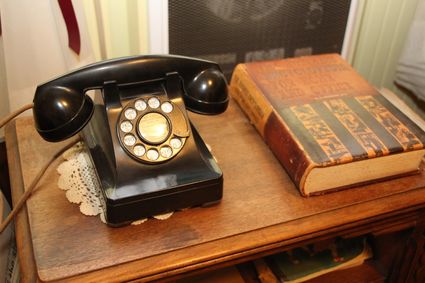 Rotary Phone on display in the Annabel Thompson rooms upstairs in the Depot Museum in Shafter.

Alexander Graham Bell invented the telephone in March 1876. The first transcontinental telephone wire was connected from New York to San Francisco on June 17, 1914. The first call was not made until July 29, 1914. By the mid-1950s, a lot of the general population were enjoying this wonderful invention. But, for my family in the late 1950s, that may as well have happened on the moon. To say they were not interested in this latest "luxury" would be an understatement.

To give my parents credit, though, financially things were not easy. They had been following the crops between Arizona, California and Oregon. We were rarely in one place very long -- and never in a regular house. Then one day [in the fall of 1956] that changed! One of my older brothers got my dad a job in Shafter. Floyd, my twin brother, and I were just going into high school. In fact, we had attended about six weeks in Porterville when my dad learned about the job in Shafter. It meant we would be a little better off. So away we went!

Our first "place of residence" was a group of cabins that had been used for migrant farm workers. We didn't live in those long until we were able to move to what was termed "garden homes" in the same area. This was about 4 or 5 miles outside of Shafter (the North Shafter Farm Labor Camp). The term "garden homes" meant that each little white house had an area large enough for a good-sized garden. My parents loved that! Through the following years they raised enough vegetables to feed their family and many more from their garden and fruit trees!

We enrolled in Shafter High School. That is when we first became aware of the "luxury" called a telephone. Our niece – who was very close to our age – lived in Shafter and had a telephone. We desperately wanted to be able to talk to her at any time and plan how she might come out and spend the night with us.

We finally convinced our parents that a telephone in our home would be a really good idea. We played the old "in case of an emergency" card and it worked!

How we anticipated the installation! Then came the day it was hooked up and ready to be used – but wait -- Someone else was already talking on the line! How could that be? Reality set in! Yes, we had a telephone – but – it was a "party line." We soon found out what that meant! We would actually receive two rings – one would be for us – the other for one of the other "parties." Our ring was two short rings and a long ring. Theirs was two long rings. But, if that was not enough, there would be two other parties to share the line; however, we would not get their rings.

All in all, this meant that using the telephone would require us to obey a recently acquired "rule." If we ever picked up the receiver and heard someone else on the line, we were to hang our receiver up immediately and give them privacy!

WOW! What an eye opener! Our line seemed to be constantly busy – but not with our calls. Floyd and I often compared notes – we never listened very long – most especially when our mother was around – but we were curious as to who we were sharing the line with. Could it be that "they" were planning a murder, a robbery – or some other intriguing idea? Or could it be a teacher that we would benefit from knowing what they were thinking about? Or, perhaps it could be a neighbor and they were spreading malicious gossip about us – of all people!? Our imaginations ran wild – until they overheard us and completely squashed our wild ideas!

Soon the party line was cut to only two parties, and that made it somewhat easier to live with. We were never able to find out who the other parties were, however.

As time went along, the party line was done away with and real "privacy" became possible. What a turn in the road that was! The only thing you had to worry about was other family members standing around waiting for their turn. That brought up a rule 2 – sharing. A certain amount of time was to be allotted if someone else wanted to use the telephone. We learned to adjust to that one, though. After that we never lived anywhere that we didn't have a telephone installed, if we could. 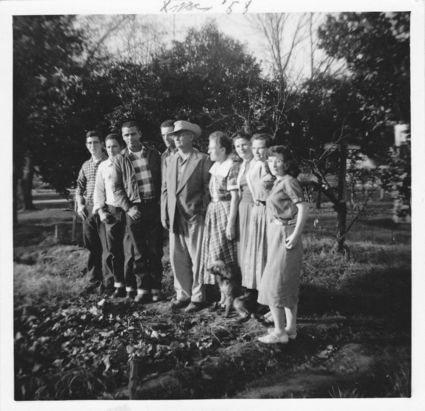 I treasure my cell phone today and think back to the days before it was even a glimmer in anyone's eye! How could we have existed without this "luxury"?