Summer of the bulker

The money was good, but the work was hard 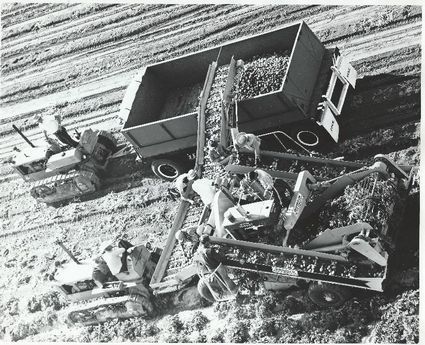 A potato harvester in operation in the field.

rowing up and being a teen was not always easy back in the early '60s. I happened to live in the small agricultural town of Shafter, just 18 miles from Bakersfield. Our family budget seemed to be forever challenged and stretched to its maximum, but I always received whatever I needed.

My first employment turned out to be a summer job grading potatoes in a local potato shed, Em. H. Mettler & Sons. I looked forward greatly to earning my own money. Teenagers in the Kern County area during these years got summer jobs in the potato sheds if they could. Jobs consisted of not just grading potatoes, but doing anything and everything to get the potatoes to market. It was a good way for students to earn money. Everyone I knew was eager to acquire employment in the sheds. If they were hired they felt privileged indeed.

Every summer while I was in high school I worked grading potatoes or something associated with potatoes. It was our belief that grading potatoes was really hard work until that one particular summer. Janet, my younger sister of two years, and I laughingly referred to it as the "Summer of the Bulker" for many years to come. That summer Janet and I had a choice: We could work in a shed, or we could make more money working on the bulker in the potato fields of Em. H. Mettler & Sons. It was our decision. Of course, we chose the bulker. Why not? It only made good sense to make more money. Little did we know at the time! Mom decided to work on the harvester that year to provide us with transportation.

Let me back up and tell you more about the bulker. As a footnote, I believe its name was eventually changed to a harvester. This particular summer was one of the first times it was to be used by the company where we were employed. I guess you could say we were sort of like guinea pigs. In later years they would improve it significantly, but not that year.

The bulker was a large mobile apparatus on wheels that dug potatoes out of the field and rotated them onto a moving belt. The belt passed potatoes and dirt clods down to six or eight women located on each side of the belt. One man was placed at the front of the vehicle to keep everything running smoothly. The women threw out dirt clods and bad potatoes, leaving the good potatoes to be transferred along the rotating belt to the truck.

To say it was a dirty job would be an understatement. We were located right in the middle of all the dust in the field. As a matter of fact, the bulker was the source of all the dust. In my opinion, the bulker was the first line of defense for the "lucky" women grading potatoes in the sheds. That being the case, the three of us were on the front line of battle that summer.

The bulker was supposed to bring automation to the processing of potatoes in the fields. In the next few years it did make some field jobs obsolete. Mom, Janet and I paid the high price for progress that summer by working on the bulker.

The three of us got up around 4 a.m. each morning, drove to work in the dark and usually worked until 5 or 6 p.m.. We worked until noon on Saturdays, sometimes later. That was not the worst part. The summer heat in Shafter was seemingly unbearable

By the end of the season we were throwing out rotten, smelly old potatoes from morning until night. We even had some summer rain that year that made the work even more miserable. Dirt, dust and rotten potatoes covered us from head to toe each day. We came home exhausted to the bone every night. We would eat and go to bed, so we could start the next day at 4 a.m. and do it all over again.

Daddy had not realized how dirty, tiring and despicable the work would be as this was the first trial year for the bulker for our employer, or he would have never allowed it. At the beginning of the summer season, each morning Daddy would tease us at breakfast regarding getting up so early and looking so tired. He said, "Well girls," Mom being included, "are you ready to throw in the towel today?" Then he would laugh and laugh. He was used to early and hard work. Taking this to be a challenge, we would reply, "Not today!"

Toward the end of the season he realized how appalling it had become. At that time he really encouraged us to quit, but he would not demand that we surrender. Now each morning he would say, "I think you girls should throw in the towel today." There was no more teasing in his voice. The hard labor was definitely taking a toll on all three of us, and it showed.

Every day we would continue to say "Not today," even though we really (and I emphasize [BEGIN ITAL]really[END ITAL]) wanted to quit. To this day, that was the hardest physical labor I ever encountered during any time of employment. 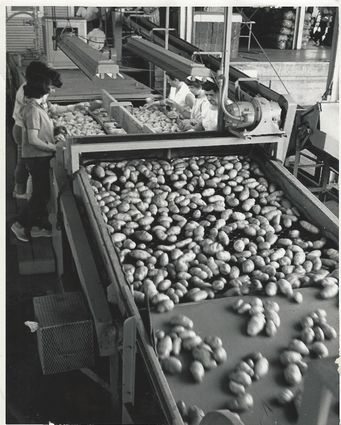 Potatoes are processed in a packing shed.

We finished out the season, but never again worked on the bulker. Janet and I earned more money than we had during any previous time, and also came away with a new respect for hard work. Hard work and money went hand in hand that year.

All of us received quite an education during the Summer of the Bulker. Mom and Daddy knew now their daughters were not only listening to their instruction, but we were acting upon what they had been teaching us our entire lives. Janet and I learned a priceless lesson; a person must be determined and persevere. Once a challenge is accepted, never quit even though quitting would be the easy way out. Our stubbornness and tenacity served us well through the following years.

Linda (Helm) McMahon is a 1965 graduate of Shafter High School and currently lives in Bakersfield.