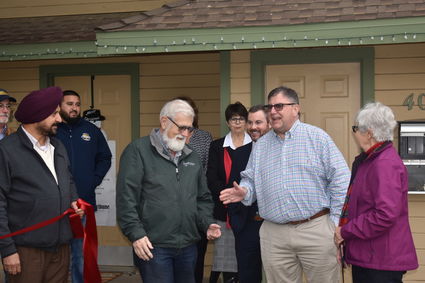 A ribbon cutting ceremony was held at the office of The Shafter Press and Wasco Tribune, celebrating the Shafter-Wasco Publishing LLC, the new publishers of the local newspapers. Shafter dignitaries, local business owners and citizens were on hand for the event.

Karly Cleveland, this year's Distinguished Young Woman of Shafter, cut the ribbon as Mayor Cathy Prout, company board President Stan Wilson, City Manager Scott Hurlbert, Publisher Michael Schroeder and a crowd of people looked on. The staff of the newspapers were there to greet the attendees, answer questions and get reacquainted with the community. The staff consists of editors Jamie Stewart and Toni DeRosa, clerk Erica Soriano, Sales Manager Kathy Smithee, and General Manager Diane Givens.

"I want to thank the City of Shafter, Michael and our staff for all of the hard work that has gone into this project," Wilson said. "We started with a dream of resurrecting the paper, and it came true thanks to a lot of hard work, a good staff, and a board that believed in this venture."

Schroeder reminisced a bit in his remarks. "I used to sell The Shafter Press for a dime. I always dreamed of someday running The Shafter Press newspaper. Now, it is real and I thank Stan, our great staff and the people of Shafter for this opportunity." 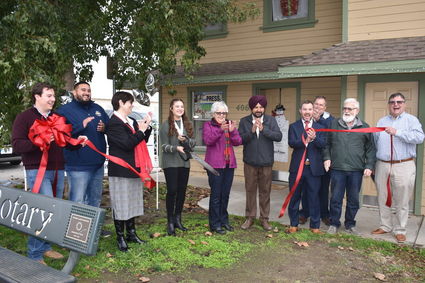 The board consists of Stan Wilson, Josh Wilson, Anton Labrentz and Larry Starrh, as well as Schroeder. After The Shafter Press and Wasco Tribune closed at the end of 2017, Stan Wilson contacted the previous owners and worked a deal to purchase the rights to the newspapers. Michael Schroeder, a Shafter High graduate now based in Connecticut, is a publisher who has several newspapers on the East Coast. Schroeder got on board and the dream was closer to reality. The group gathered for a meeting at Brookside Deli one February afternoon and decided that they would try to get a paper together within the week. It was a "crazy idea," all involved agreed, but it worked and the first issues of the new Shafter Press and Wasco Tribune came out on Feb. 15.

With more color pictures, local stories, community involvement, and a new look – and now a new website -- the papers aim to be true hometown newspapers that serve as information centers for the area.