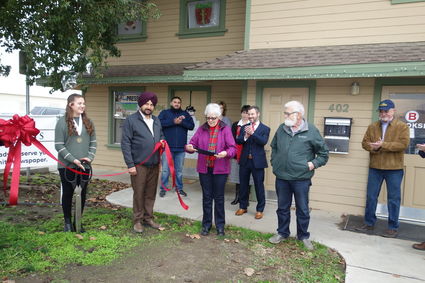 1. Mayor Cathy Prout reads a proclamation from the City of Shafter congratulating the newspaper for re-opening its doors to serve the communities of Shafter and Wasco.

Christmas cheer was in the air in Shafter Friday afternoon as Shafter-Wasco Publishing held an official ribbon cutting ceremony celebrating the new ownership and re-opening of the Wasco Tribune and The Shafter Press.

Both newspapers were shut down on December 31, 2017, when Reed Print, Inc. closed its doors. Former resident and Shafter High School graduate Michael Schroeder saw last paper a week later with the announcement (he's subscribed for 40 years), and contacted the Reed family to express his interest in restarting it. At that time, however, the publisher, Wally Reed, explained the situation and it looked too far gone. It wasn't until Shafter resident and local farmer Stan Wilson got involved that re-opening became a deal possibility two papers.

Former Reed Print office manager Diane Givens related Schroeder's connection to the paper, and his initial inquiries on purchasing The Press. Wilson contacted Schroeder, with the idea, looking for advice and a plan. Days later, Schroeder met with him, city officials, former Press Editor Jamie Stewart, Givens and former Reed Print production supervisor Kathy Smithee. The group worked together to reopen the office that day, and put out a paper the next week. The first issues of The Press and Tribune under the new publishing company were printed on Feb. 15.

It only made sense to revitalize the Tribune at the same time due to economies of scale, and, as Schroeder later said, "They need a paper, too."

He noted that his father's family had grown up there, both the Frank Schroeders and, by extension, the family of Gus and Bernice Struemph. 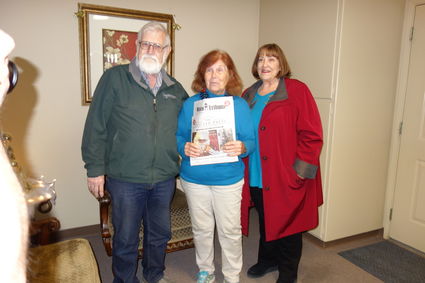 "I used to sell The Shafter Press when I was a kid for ten cents apiece," said Schroeder. "It was always a dream of mine to own the The Shafter Press." And Wilson didn't want to see the local paper disappear. "I talked to Michael Schroeder, and we agreed to start up the papers again," Wilson said.

Wilson is the curator of the Shafter Depot Museum and has a passion for preserving Shafter's history, while investing in its growth and future. Wilson and Schroeder are hands-on owners, who along with Wilson's wife, Nancy, often stop by to see how the paper is faring.

After watching the official ribbon cutting, everyone in attendance proceeded into the festively decorated office for conversation and refreshments. Cookies were provided by Rosie's Bakery in Wasco, and coffee provided by Brookside Deli in Shafter.