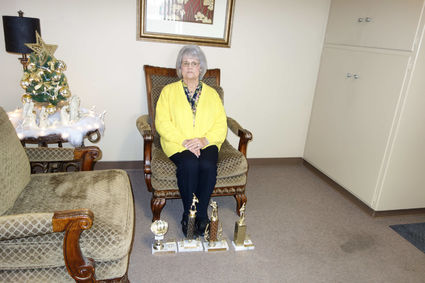 Sandra Colbert was one of the original players on Coach Richard Martinez's 1970s softball team, the Playmates.

Last week's history is no mystery.

One of the players from an all-girls softball team from the 1970s known as the Playmates has come forward and revealed herself.

During the 1970s, Richard Martinez coached the Playmates, featured inlast week's Mystery History. Martinez's slo-pitch softball team of 8-10 year olds were also highlighted in the same issue while celebrating the end of the year at Pizza Factory.

Sandra Colbert walked into the [BEGIN ITAL]Wasco Tribune[END ITAL] office on Friday. Colbert was the pitcher and played first base for Martinez. "We took the championship four years in a row," she said.

Although the hair is a bit white, she still looks in shape to be out on the mound tomorrow.

Colbert played softball from 1978 through 1987. After her softball days, she became a housewife and mother of two. "Neither of my children was interested in playing sports," she said. "I played in summer leagues, city leagues and was on a team for the local Sprouse Reitz dime store."

Team members either came from Wasco, Shafter, Delano or McFarland, she said. "We played so many games each season; I couldn't keep count of them all."

Colbert hasn't played ball in a number of years. "Back then, I was pretty aggressive," she said.

She added that she enjoyed everything about playing ball. "It was all fun to me," she exclaimed.